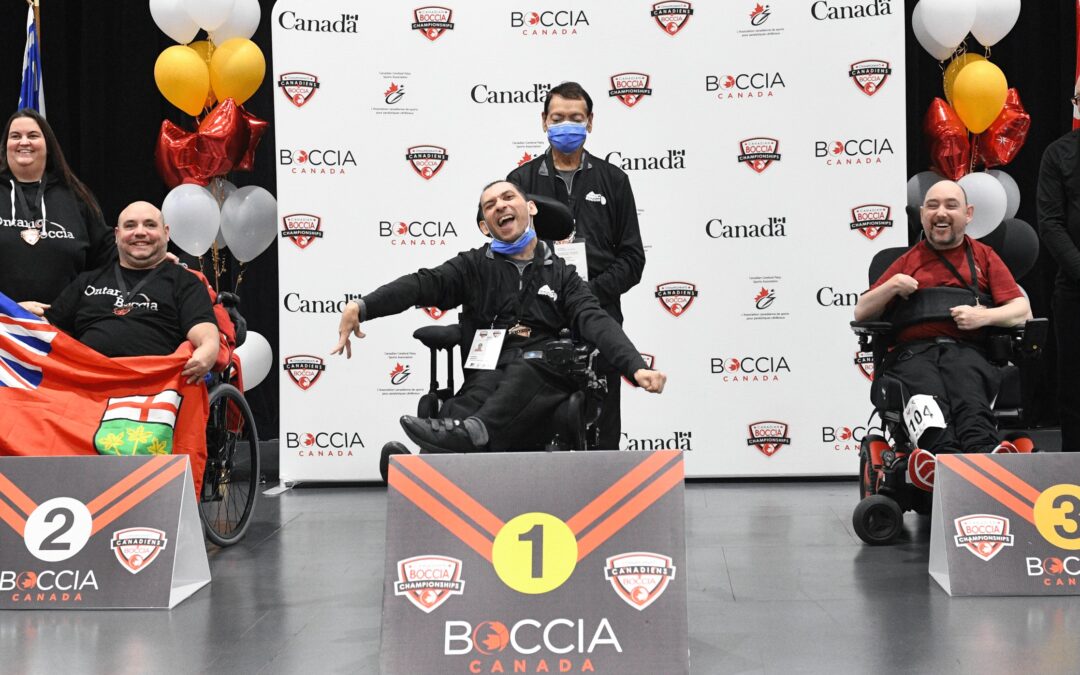 At this year’s 2021 Canadian Boccia Championships, Team BC had a lot of things to be proud of. Leading up to the Championships, our coaches Rodney Anderson, Sean Harrigan, and Lauren Swan (who would be experiencing their first championships in this role) prepared our athletes through virtual training sessions aside from one in person training opportunity before heading to Quebec. Thank you to our coaches and athletes who worked together through these challenging times!

Highlights from the competition:

In her first game of the tournament, Lisa Ferenc took on Hayley Redmond of Newfoundland who was ranked number 3 in the BC2 division for this tournament. Last time Lisa faced Hayley was in the 2019 Canadian Boccia Championships in Victoria where Lisa suffered a tough loss to Hayley of 16-0 in her first championship experience. However that was 2019. Putting her improvement on display, Lisa started off the match winning. Although she did not win the match, a respectable score of 6-3 against Hayley was a lot to cheer about! Not only was this a significant improvement from their last match up, but Lisa scored more points in that single game than she had during her whole 2019 Championships! On the last day of competition, we also found out Lisa is a strong overhand thrower which is something she will take back home with her to practice in preparation for the next Canadian Championships.

After a tough match to end Day 2 of individual competition for Hanif Mawji, Hanif reset himself to prepare for his final round robin match on day 3. Facing the number 1 ranked BC1 division athlete, Lance Cryderman of Ontario, Hanif battled to take the win in an exciting extra end. Not only was this a win for Hanif, it sealed his spot for 1st place winning the gold medal for the BC1 division – a back to back feat for Mawji. Chris Halpen who also competed in the BC1 division just missed grasping the bronze medal that was captured by Stephen Wescott of Newfoundland through point differential. Chris had also defeated Lance Cryderman 5-3.

Coming into the competition for the first time was Nathan Bragg who would be competing in the BC2 division. Unfortunately, Nathan had to withdraw from individual competition play due to medical issues. However, everyone was pleased and excited to see Nathan join his teammates on the court on Saturday for BC1/2 Team Play. The Team play was substantially different than in the past. Led by captain Paul Jalbert, Team BC showed great improvement working together through communication, taking their time on the court to make strategic and smart decisions, and using each other strengths to make the best decision shot for shot that would help them succeed. This is all very promising to see moving forward into the next competition. The best game was against Ontario who won 5-4 in the last end. It was a back and forth, strategic and exciting game that both teams battled hard for.

Watch recaps of all the games on Boccia Canada’s YouTube Channel and check out the photos on their Facebook page.