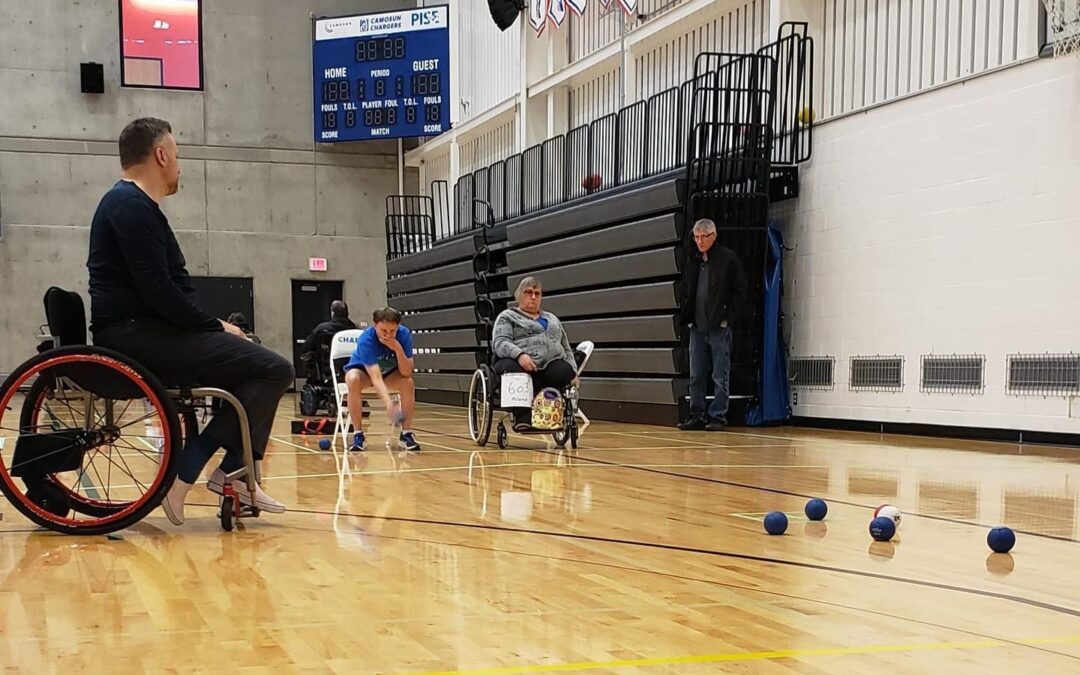 The Open Class Semi Finals where both nail biters!

Mildred Thomas(1) faced off against Kylie Waters(4) on court 3. Mildred came on strong in the first end scoring 4 points. However, Kylie honed in and closed the gap in the following two ends scoring 2 in the second end and 1 in the third end to narrow the score to 4-3 going into the final end. Mildred’s early lead paid off as she redeemed herself to close out the game and advance to the gold medal final by scoring 1 point to bring the final score to 5-3.

On court 4, Daniel Hutchison(2) was set to play first time tournament attendee Rene Poirier(3). Daniel took the first end scoring 1. Rene answered back in the second end to tie the game up 1-1. With motivation from the second end, Rene kept his rhythm scoring 2 points in the third end to take the lead 3-1. The experienced competitor in Daniel persevered and scored 3 points in the final end to win the game 4-3, securing his place in a familiar gold medal match up against Mildred.

Unlike the Open Class Semi Finals, the Mixed Division semis were dominate.

Nathan Bragg(1) faced off Luke Cambridge(4) on court 2. Nathan scored big in the first end (4) and the third end (5) putting him in a comfortable position to advance to the gold medal game. Defensively, Luke held Nathan to 1 point against in the second and fourth end. The final score was 11-0 for Nathan.

On court 1, first time tournament competitor Braiden Gilmour(2) faced veteran Chris Halpen(3). Chris’s experienced showed scoring big in the first end to take the lead 4-0. Braiden’s defensive game came on in the second end, holding Chris to 1 point. With the jack ball back in hand, Braiden scored 1 in the third end to narrow the score to 4-1. Chris sealed the deal to advance to the gold medal game against Nathan by notching the final point in the semifinals to end the game 6-1.

The Bronze medal match featured Kylie Waters and Rene Poirier. Starting off strong with the jack in hand, Kylie notched 3 in the first end. Rene did not let the early lead discourage him! Chipping away, Rene scored 1 in the second end and 1 in the third end to have the score at 3-2 entering the final end. With measuring being a common trend throughout the match, the final point was scored by Rene to push the game to a tie break! Continuing to prove Boccia is a game of inches, Rene captured the Open Bronze Medal by scoring 1 in the tie break end. What an exciting final!

Court 3 featured the Gold Medal Match Up for the Open Class Division: Mildred Thomas vs Daniel Hutchison. With what was thought to be tight match up like their tie breaker game in round robin play, Mildred came into the match hungry for the gold. Scoring 3 in the first end, 1 in the second end, 3 in the third end and 4 in the fourth end, Mildred secured first place in the Open Class Division.

Luke Cambridge and Braiden Gilmour faced off for the Bronze medal. Braiden captured the first two ends scoring a point in each. Braiden capitalized in the third end, scoring 5 to solidify the bronze medal win. Luke did get on the scoreboard though scoring 1 point in the final end finishing the game 7-1.

The Gold Medal match in the Mixed Class Finals was one for the books!  Nathan Bragg and Chris Halpen went head to head on court 2. Chris started the game with the Jack and scored 1 in the first end. Nathan responded, scoring 1 in the second end and another 1 point end in the third end to take the lead 2-1 going into the final end. In an exciting final end, Chris scored 1 point to push the game to a tie break end. Nathan secured his first ever podium finish in Boccia by scoring 1 point against his tough opponent in Chris. A true medal match performance by both athletes and a great way to end the weekend!

We would like to thank all of the athletes, volunteers, officials and our wonderful partners at PISE for all of their hard work this weekend. Without everyone’s support, tournaments like this would not be possible.

The Boccia Western Championships was created in British Columbia in 2019 to provide more competition opportunities for Boccia athletes and officials living in Western Canada. The tournament is open to all Canadian and American Boccia athletes.